How to manage networking for multi-computer synchronisation

The networking functionality of CaptureGRID allows you to connect and control a large number of cameras, by splitting the USB connections across multiple computers. This means the number of cameras is not limited by the USB hardware capabilities of a single computer, but instead can be scaled up by adding more computers.

The computers you use do not have to be the same type, or even use the same OS, they just need to have the CaptureGRID software installed and running on them, and be connected to the same local network. So for example, if the multi-camera rig needs to support 90 cameras, this could be achieved with either: 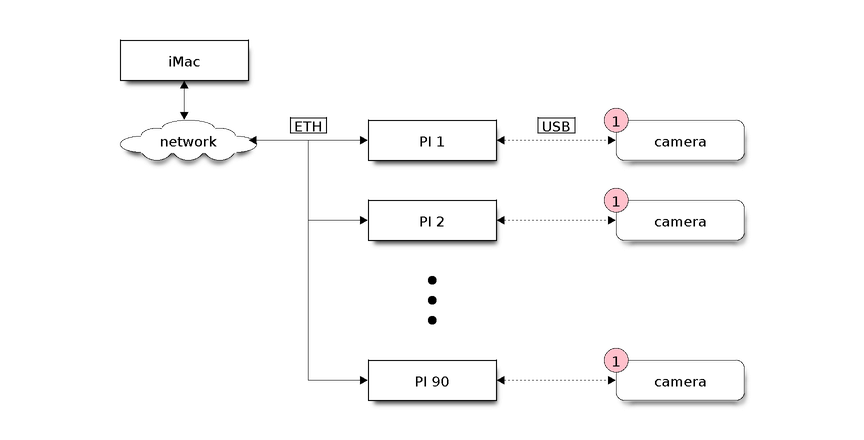 The screenshot below shows the Network tab, which is used to monitor and these control features. 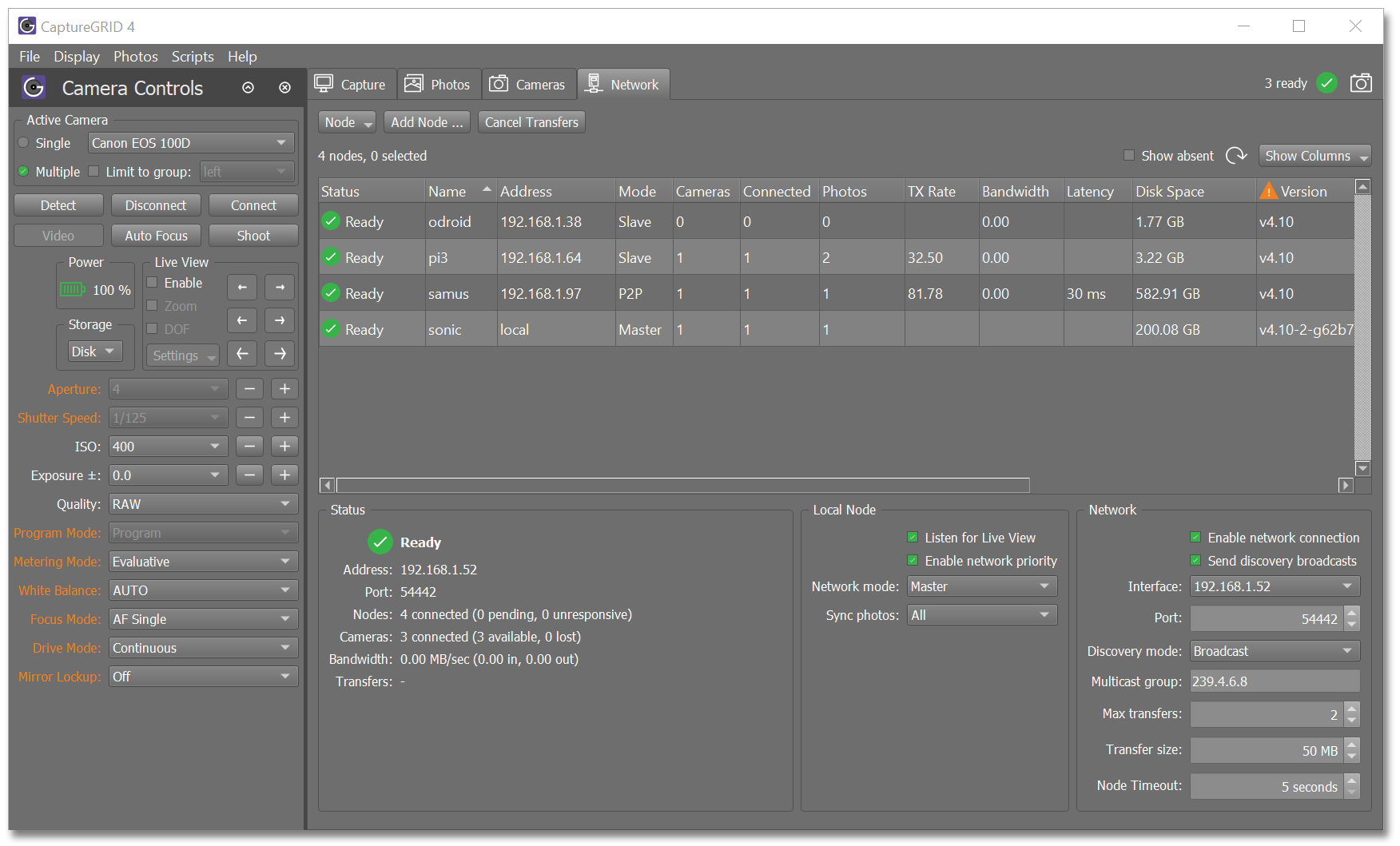 Each computer on the network is referred to as a Node, and the table in the centre shows all the known nodes along with their status.

In order to discover and connect to the other nodes on the local network, the app will periodically send out a discovery message. Once another node is detected, the two will begin further network communication and synchronise camera and photo information.

Once all nodes are connected and synchronised, the user can operate the app from just one of the computers, to get a unified view of all cameras and photos on the network, and be able to take actions on all cameras at the same time.

Each node can be configured to operate with a particular network mode. This controls which other nodes it is allowed to communicate with.

To change this, right-click a node in the node table, and use the Set Network Mode menu option. For the local node, it can also be set using the Network Mode dropdown menu. The valid modes are:

The default mode is P2P, and this is suitable for most situations. A typical configuation is to have one node set to Master, and all other nodes set to P2P.

For scenarios that have a large number of nodes (such as when using Raspberry PIs or similar), it is recommended to set the main computer to Master, and all other nodes to Slave. This reduces the overall network traffic being sent between nodes.

Before right-clicking the nodes in the node table, its possible to select multiple rows in the table. This allows the mode to be changed for multple nodes at the same time.

It’s not just camera and photo information that can be synchronised between nodes, the app also allows various options to be set from one node by the user, and automatically sent to the other nodes.

This is enabled for any nodes that have Network Mode set to Master.

It’s recommended that you consider one of the computers as the Master node, and set the Network Mode to Master for only that node, and make all edits to the Options from that node.

Whenever a new photo is taken, information about that photo is synchronised to all nodes. However by default, the actual photo file will only be saved to the node where the camera is connected, to the Photo Download Directly on that computer.

To gather all the photos onto a single computer, the app has a feature for transferring photo files between nodes. To enable this, change the Sync photos dropdown menu. The valid options are:

An alternative to using the built-in photo transfers, is to instead point each node’s Photo Download Directory to a common network shared folder. Depending on you network configuration, this may result shorter times to gather the photos to a single location.

However, the app’s photo viewer will not be aware of those network transfers, so it will only be possible to view the photo from inside the app, on the node that did the USB download.

The main part of the Network tab shows a table containing all the nodes that are known to the local app. It lists various bits of information about each node, as described below:

When the network connection is enabled, the app will retrieve the list of valid network interfaces on the computer. These are listed in the Interface dropdown list. The app will attempt to choose the appropriate one for the local network, but you may need to select it here if it cannot determine the correct one to use.

This option allows control over what method is used for networt discovery. This may need to be changed if the computers are unabled to detect each other, due to how network traffic is handled by the local router.

This controls the maximum number of active photo transfers coming into the node.

When transferring photos, the data is split across multiple network messages; this controls the maximum size of each message. A larger transfer size means fewer messages need to be sent, but more memory is required.

If no messages have been received from another node within this timeout period, that node is considered to be unavailable and is disconnected.