How to customise for filename when saving photos

Whenever the app detects that a new photo has been taken, it will assign that photo a unique filename. The actual filename to use is computed dynamically by the app, and is controlled by the current name policy. These options can be customised in the Options window under the Name Policy tab, as shown in the screenshot below. 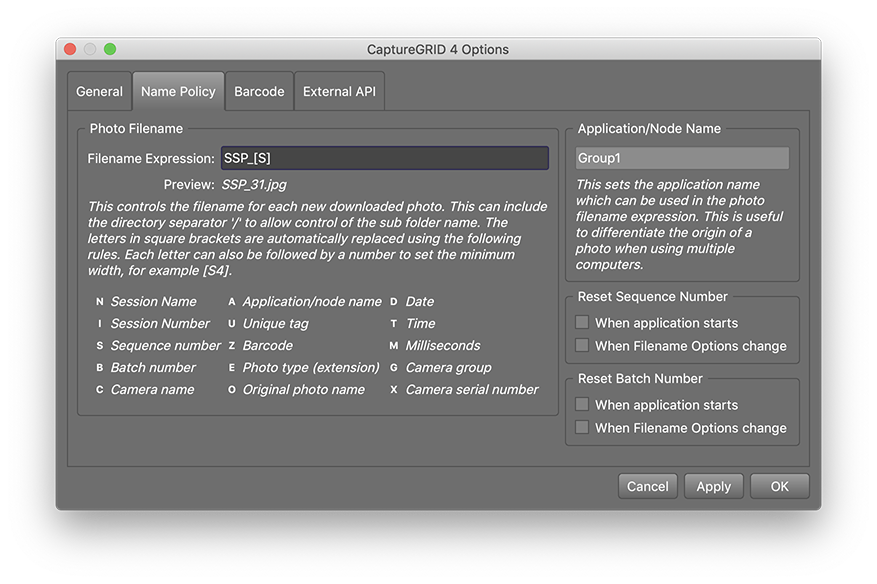 The filename expression is the text that specifies how each new filename is computed. This text may contain special identifiers, as letters inside a pair of square brackets. These parts are automatically extracted and replaced with dynamic information, by following some rules for each letter.

For example, if the text contains [D] then this part of the filename will be replaced with the current date. The full set of rules is shown in the table below.

If the filename computed is not unique, it may clash with an existing photo file that has already been saved. If this happens, the app has a safety mechansim to ensure no files are overwritten, see Overwriting Files. So if the final filename has an unexpected _1 or _2 suffix, this is the reason.

The app UI has a decidicated Filename Options window where this information can be quickly checked and edited, as shown in the screenshot below.

This allows you to change the [N] Session Name text and [U] Unique Tag text, manually increment and decrement the [I] Session number, and manually reset the [S] Sequence number and [B] Batch number. These changes take effect immediately and will be reflected in the filename for any subsequent photos that are taken.

This window also shows the current Barcode information. The app has the ability to scan photos for barcodes or QR codes, and extract the text from them. Such barcode text can then be used as part of the filename by using [Z]. For more information on how the barcode scanning works, see Barcode Scanning.

The filename expression can also include the directory separator /. This allows one or more subdirectories to be included in the final filename. The final filename will always be relative to the current Photo Download Directory, which can be set in the Options window.

Although the [O] Original photo name should contain the filename that was generated by the camera, it only does this when using the Card Storage mode. If the Storage mode is set to Disk or Both, then the camera will not provide information about the filename it generated, and hence the app will end up using text such as IMG_0000 instead.

The [C] camera name is extremely useful when using multiple cameras, as this allows the filename of each photo to contain the name of the camera that took the photo. For each camera that is connected, the app will store a name for the camera. This name is associated with the camera’s serial number. The name can be customised in the camera table UI, by right-clicking the camera as shown below: 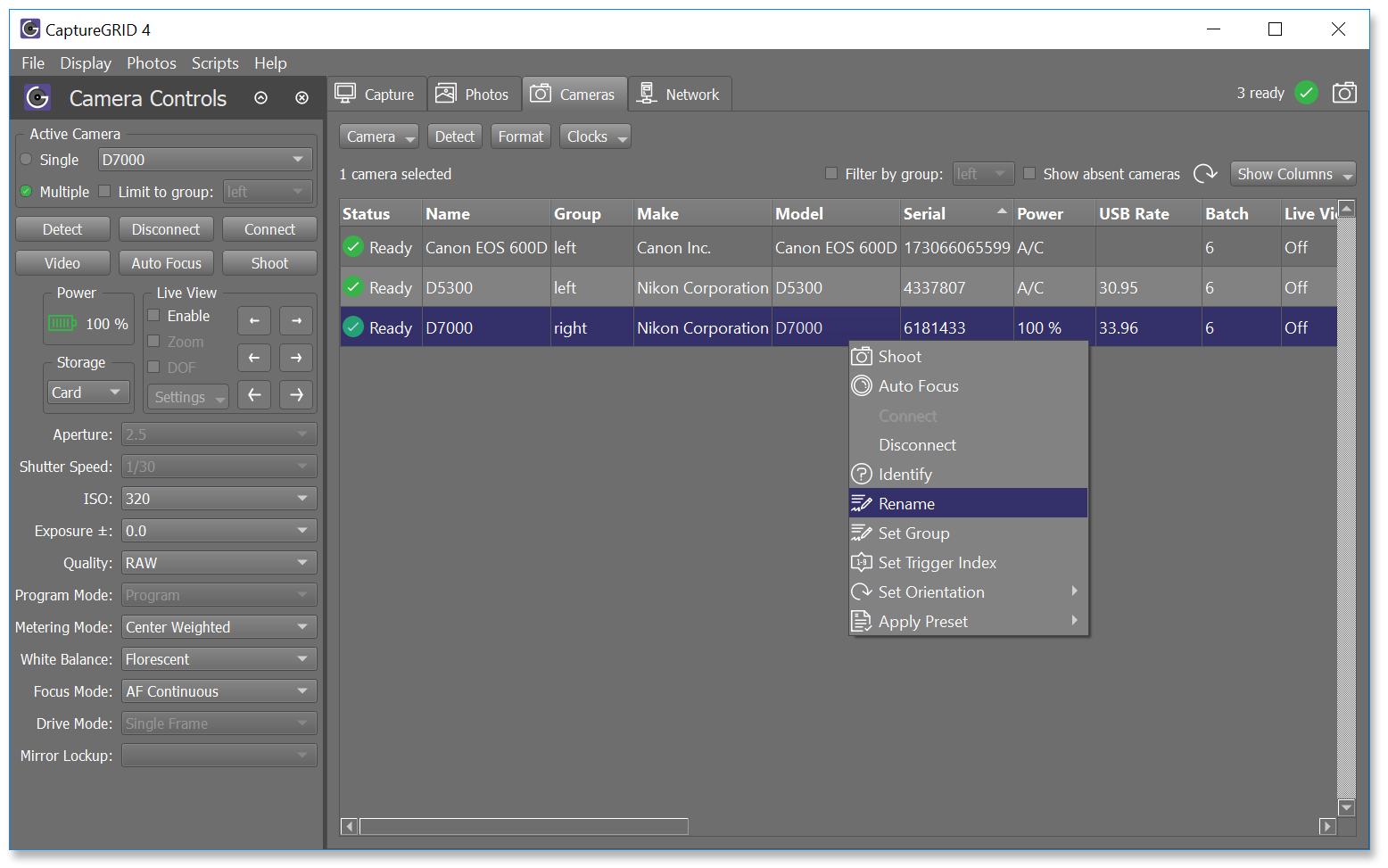 The [T] letter also has an extended option, to allow extra customisation of how the date/time is generated. After the T character you can specify an arbitrary string, which is then passed to the standard strftime() function for formatting. For example [T%A %d %B %Y] will pass the string %A %d %b %Y to strftime(), which will format it as Saturday 20 August 2017.

For more information on what can be handled by strftime():

Any invalid characters in the computed filename will be replaced with an _ (underscore) character. This includes the space character and the : (semicolon) character.

The following table shows some examples of the filename expression, and what the resulting computed filename would be. This assumes the photo taken is a JPEG, that the current sequence number is 128, the current batch number is 23, the camera that took the photo is named “centre”, The current unique tag is “modelX”, and that the current date is 20th August 2011.